Converting a third-party NES controller to work on a SNES

A friend of mine put out a challenge where if someone had a controller that was unbelievably awful that they should send it to her and she'd use it to play a modified version of Super Mario World. Her restrictions were that it couldn't require physical exertion (such as a dancing pad), but if it worked on a standard Super Nintendo, she'd try it out. Being that I am someone who likes to read rules and see where there are loopholes, she never told me I couldn't just make her a controller that was designed to be bad on purpose.

I've been tied up with other work as of late so I haven't been able to focus on making her a controller from scratch, but luck would have it that a friend of mine was giving me an old NES clone she no longer wanted and upon receiving it, I was amazed at the awful controllers it came with. 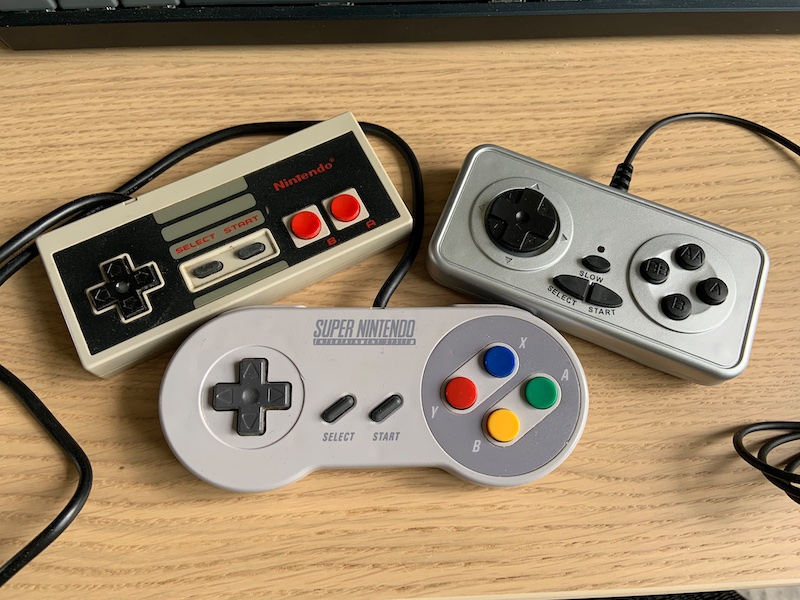 The cool thing about the NES and the SNES is that the Super Nintendo itself was initially designed to be backwards-compatible with its predecessor. This ultimately did not become reality, but much of the internals of the SNES resemble what is on the NES and that includes the controller inputs.

Electrically speaking, the NES and SNES controller ports are compatible even if shaped different. 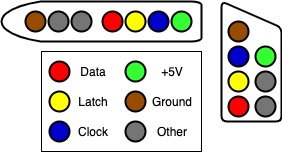 Diagram of a SNES controller port (top-left) and NES controller port (right) with pins colour matched on their respective ends. Brown for ground, green for +5 VDC, red for data, yellow for latch, blue for clock, and grey for pins reserved for extra features, typically found on multi-tap devices.

As shown in the image above, each of the seven pins on each console (SNES on top, NES on right) have identical roles on each system--the two pins marked as "other" are not important for this particular topic, but they are also the same. The only difference between the two is the data transmission: the NES sends 8-bits from its controller and the SNES sends 16. This may present problems, but I will leave that for later. 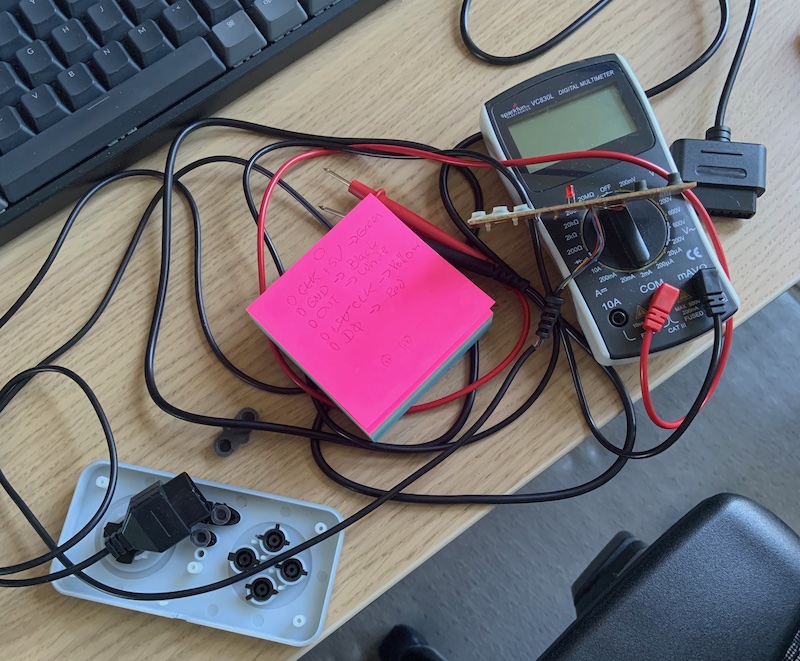 The cursed controller torn open with notes about what each pin did after testing with a multimeter.

There are two ways we can go about converting the NES controller to work on the SNES: either make ourselves a new adapter or we replace the connector. Because I have done work on other projects which use the SNES controller port, I had a SNES connector available and opted to just replace the cable all together.

To do this, I just desoldiered the existing cable after performing continuity checks to determine which circuit did what and then soldiered a new cable in place. It's just that easy assuming you are familiar with using a soldering iron. The only hard part is just ensuring that you did this properly because mixing up your +5 VDC line with your data may prove to be harmful to ever diminishing Super Nintendo consoles.

Having said that, if you do use the above image as reference, please double-check with other sources as you do not want to make a mistake if I have made one in the diagram. 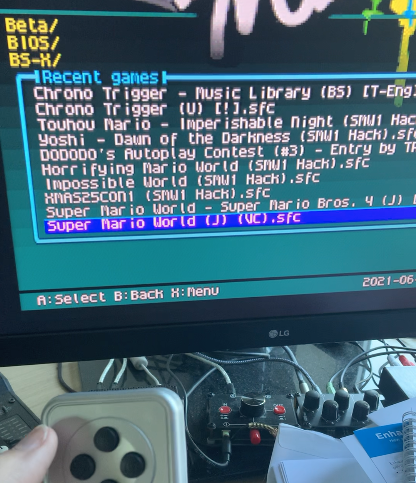 Success! I can move stuff around on the screen. That is, there is one problem: I am missing the A button, which means that testing against my FXPak Pro requires me to load a game using a standard SNES controller. Nonetheless, I went and swapped controllers temporarily and then loaded up a game I felt was appropriate: Super Mario All Stars. 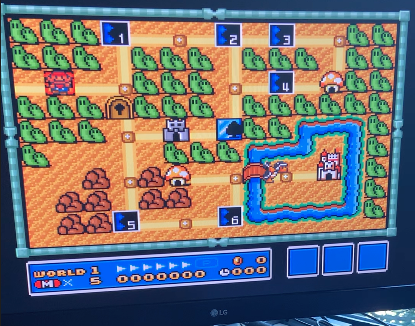 I can select Super Mario Bros. 3 but I cannot do anything beyond the map.

This presented the aforementioned problem: I can move around the menu and select a game, but upon loading any of them, I cannot at all make inputs. It was very ironic that a game ported from the NES to the SNES would not work with what was electrically speaking an NES controller. I suspect that the reason for this is because there are two modes on the console in where the game determines inputs: manually or automatic.

I couldn't find a source on All Stars with respect to polling, but my suspicion is that it may be reading the memory addresses for inputs and with nothing showing up in half of what would normally be filled, it just doesn't register inputs at all and fails. So then, does this mean the same fate for Super Mario World? 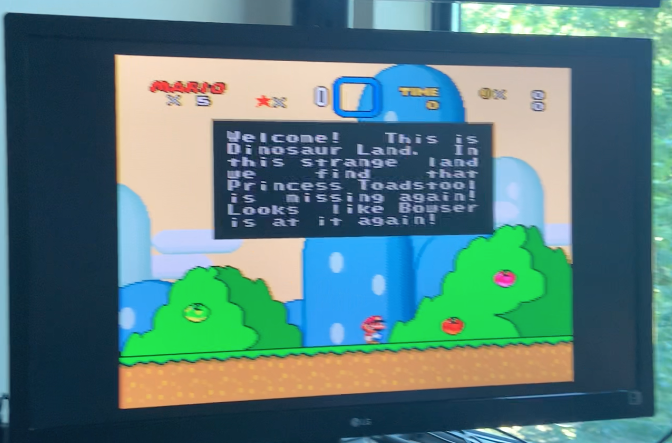 Success! I was able to move around on the screen! I tried to do a box jump in Yoshi's Island 3, but failed so I figured it was a bad controller.

So let's prepare to send this to my friend. 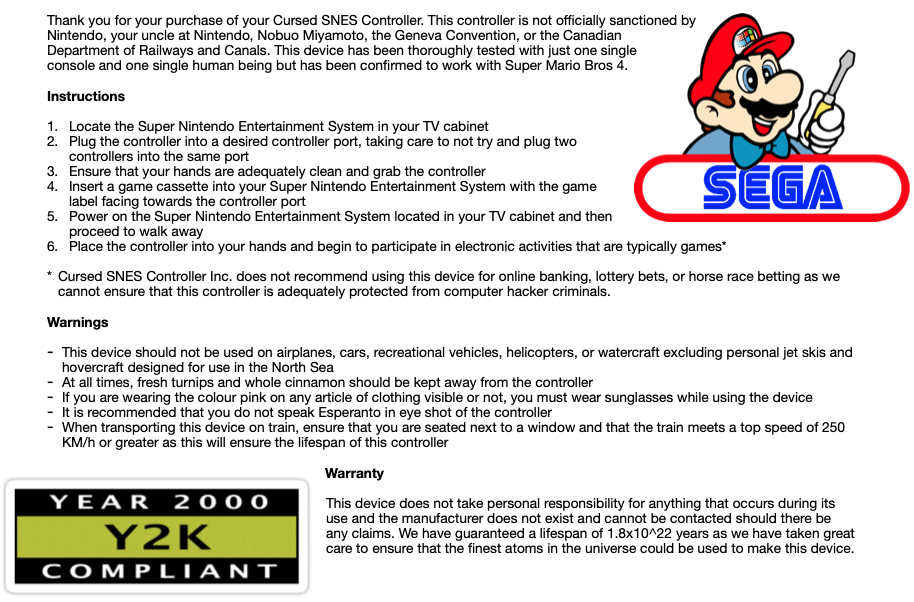 No cursed controller is complete without instructions.

Happy with the above instructions and the controller being operational, I sent it to my friend for her to endure in a few weeks.

You can see her reaction here.

The verdict is that you cannot play any Super Mario World hacks that require spin jumps as it is missing the input to permit that. While this lack of a spin jump prevents you from performing an 11-exit speedrun of the regular game, it does not prevent you from completing it quickly as you can do it in 13 exits. Additionally, it was determined that the controller allows left-right inputs (physically impossible on a regular controller), meaning that one could use this controller to go out of bounds.